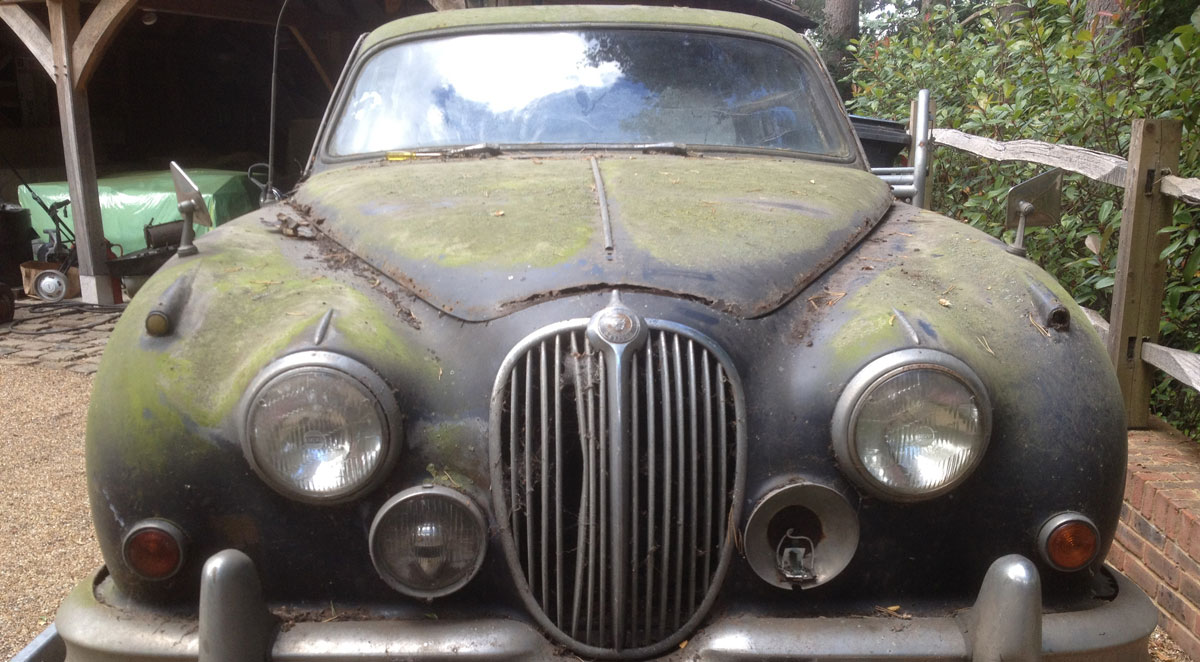 Not all classics can be saved

This is a Sad story of a once-loved Jaguar, as the car had been left so long its was simply not economical to repair, although at Classic Car Buyer we buy almost any car and rarely turn any away.
This was another chance’ find like so many of our cars, being in the right place at the right time.

A delivery drive dropped off some parts at Classic Car buyer HQ and we got talking, he mentioned a Jag parked in barn, I obviously showed some considerable interest, and after a few minutes chatting the driver he gave me a rough idea where the car was.

It was over a year that had passed since he’d last seen it, so It wasn’t guaranteed it was still there.
Not to be put off, like most barn find sightings, they always take priority over everything else, so the hunt was on, we immediately jumped in the Landrover Discovery and headed to the location, at first we thought it was a lost cause and maybe another dud sighting of the elusive Loch Ness Monster of barn finds, then I spotted it, lurking in the bushes like a Jaguar in the wild ready to pounce.

It was more under a barn than in it, but sure enough there it was, a Blue Jaguar 3.4 MK II.

I knocked on the door of the cottage that nestled beside the field hoping someone was in and became very excited when I heard movement.

A very helpful gentleman answered the door and explained, it wasn’t his and that the field belonged to a farmer just up the road, so off we trundled, the farm was guarded by two of the biggest dogs I’d ever seen, lucky really as they went wild when we arrived and the farmer came out to see what the commotion was all about.

I explained we’d spotted the Jag and asked if we could take a look, ok if you’re quick was the reply, we weren’t allowed through the farm, not that I wanted get anywhere near the dogs, so we drove back to the field wadded through a load of stinging nettles and jumped over the fence, the farmer met us there via an easier route!, 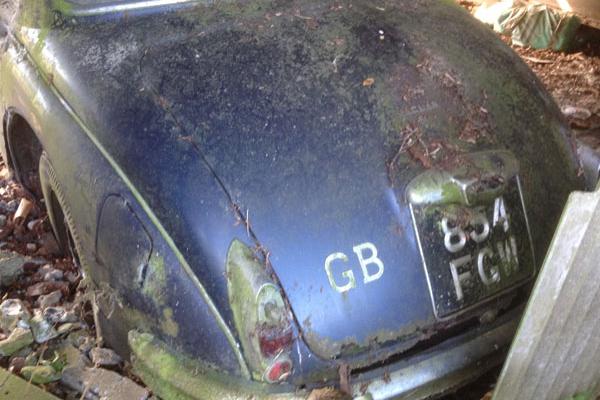 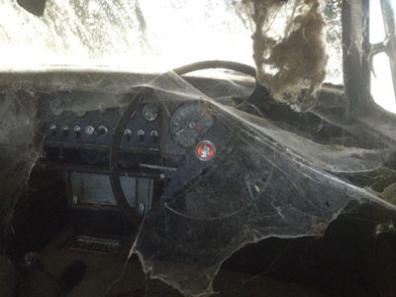 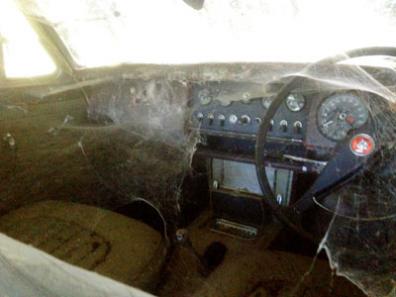 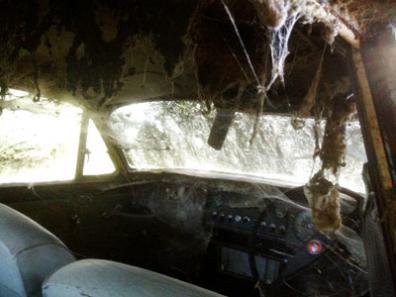 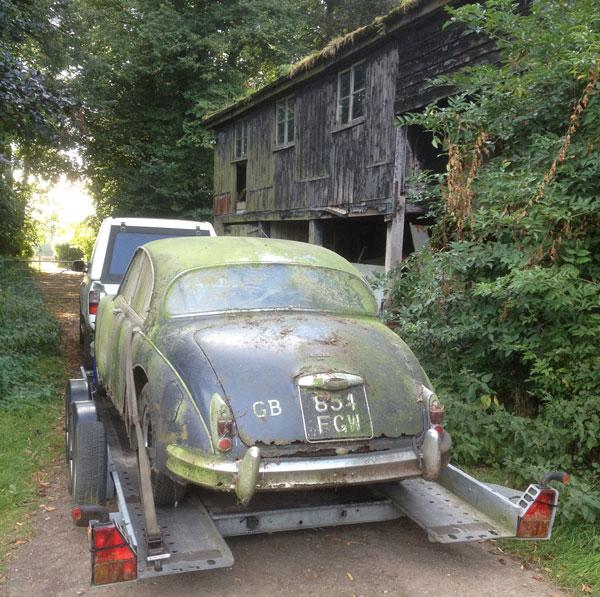 It was clear the car had seen better day, it was sunk in the ground, buried in timber, and if I was scared of spiders, it would have finished me off.
The farmer told me the car was her Grandfathers, he’d owned it from new, and that it had been in its resting place for over 40 years.

Time was short so we swapped contact details and we left wondering if it was worth buying?

Of course it was!

After several weeks and phone calls we arrived at a price we both agreed on, I went back a couple of days later to collect the car not really knowing how I was going remove it, the first job was to secure the building it was in, we used a tractor to lift the roof and I put in new timbers to help the building live a little longer, after digging down to get a jack under the car I removed the brake calipers so the wheels would turn, and put on another set of wheels.

Initially, the intention was to take the fence down however that looked tricky and would be messing up the area, so in the end, we agreed it would be easier ‘and more fun’ to free the car going through several fields with a tractor.

Overall it was a truly lovely day with the sun shining, drinking lots of tea and learning all about the original owner and eventful trips taken in the car.

The car ended up being a great source of parts and helped several other Mk 2 Jaguar stay on the road. 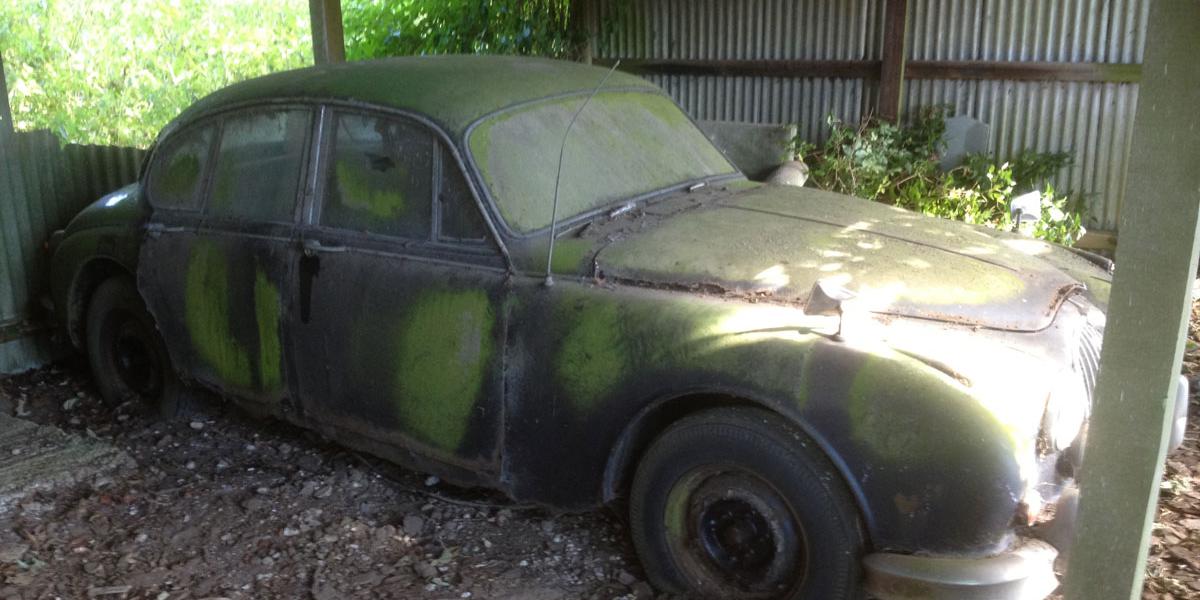